This Jungian Shadow inspired series is comprised of the following sub-series:

Photographs of the paintings and more information can be found by clicking on the related  title on the Navigation Bar to the right, or simply on the titles above.

“Worlds Behind Worlds” and “Inner/Outer” are two interconnected painting series which can be shown together but also in various other formats. The first series, “Worlds Behind Worlds,” is a geology-inspired body of work.  The second “Inner/Outer,” is a Jungian shadow-inspired series. The conceptual link between this unusual pairing of themes is that they both record and reflect the effects of passage of time and events (natural phenomena or psychological experiences) on substrates (earth or psyche). One possible way to show the two series together is shown in this sketch:

The pairing of themes may evoke many different personal responses in the viewers as they ponder possible interconnections of these two foci. The Jungian shadow series is inspired by Carl Jung’s concept of the shadow as all that we humans bury in our unconscious that is taboo in our family, society etc. Of note, this has the potential to be positive in many instances. For example in an exceedingly rigid society, creativity may be one of the hidden gifts some people carry within. Sometimes, with persistent attention, we can bring these gifts forth and integrate them more fully within ourselves. Geologically, this process may be likened to the building up of layer upon layer of sediment; subsequently, different layers may be eroded back to by rain, wind or floods, exposing various layers. Click to read more.

Below is a sketch of one possible way to show “Inner/Outer” and “Worlds Behind Worlds” together, as initially envisioned. However, many other possible ways of showing this work exist, including showing each of the sub-series individually. 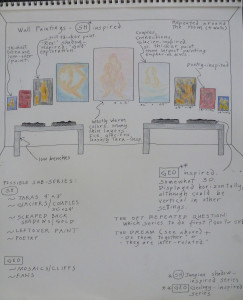 “Worlds Behind Worlds” series are lying flat on benches with changing lighting. “Inner/Outer” paintings are on walls. This format is repeated on and in front of all four walls.